I recently presented  a lecture/video presentation about the Thunderbirds History from 1953 through 2013, their beginning at Luke AFB just to the West of Phoenix, Az in May-June 1953. Their first public airshow flying the Republic F-84G Thunderjet was some 3 weeks later at Williams AFB, AZ just East of Phoenix and home of the former  “Acrojets” demo team. The original team members included  identical twin brothers Bill and Buck Patillo who were chosen based on their previous experience with the USAF-Europe team called the “SkyBlazers”. Posters, Pictures, models and Fact Sheets were displayed of the all the Thunderbirds aircraft used by the team from 1953 to present including the following: Republic F-84G Thunderjet  from 1953-1954; The Lockheed T-33 Shooting Star used during the 1950s and early 1960s; the Republic F-84F Thundersteak used by the team from 1955-1956; the North American F-100C Super Sabre  for 13 years from 1956 thru 1963; the Republic F-105B Thunderchief for only six airshows in 1964; the North American F-100D Super Sabre from 1964 thru 1968; the McDonnell Douglas F-4E Phantom II from 1969 to 1973; the Northrop T-38A Talon from 1974 thru 1981; and finally in 1983 the team transitioned to the Lockheed F-16 Fighting Falcon which is presently  being used some 30 years later. Logistics aircraft included the C-123B Provider, the C-119 Flying Boxcar, and the C-54 Skymaster before use of on loan  C-130 Hercules, C-141 and C-17 aircraft used presently. Three videos were shown: an aircraft history timeline picture presentation of the aircraft used from 1953 thru 2013; a History footage of aircraft flown including a F-4E Phantom II airshow and their current aircraft, the F-16; and the final edited video was taken by the speaker at Davis-Monthan AFB, Tucson, AZ on April 15th, 2012.Handouts were also provided to each attendee. 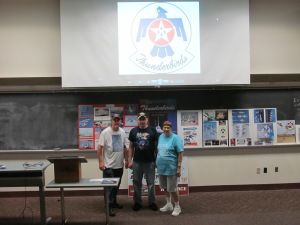 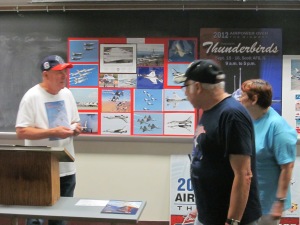 You can find out more information about the USAF Thunderbirds here.